Julian Smith is a popular YouTube celebrity known for his hilarious videos he acts in and directs. He owns and operates his own production company, Papertown, and is a frequent collaborator with Rhett and Link.

Julian grew up in Nashville, TN where he spent the weekends creating unbearable videos with pre-pubescent versions of his friends. He found that practice didn't make perfect, but it did help. After working for hire on other people's projects for six years, Julian decided he'd quit freelancing and go back to making videos with his friends every week.

Returning to this, he moved to Los Angeles after living as a Nashvillian for 22 years. He is currently living with the love of his life, Sarah with two cats, Scout, and Pepper mooching after their owners.

Moving to Los Angeles, Julian started posting videos to video-sharing site YouTube. He soon gained a following of fans and made a career of updating his juliansmith87 channel.

In addition to his one-shot viral videos, Julian directed and acted in multiple YouTube video series, namely his two-season drama Kidnapped, his hilarious Mr. Timn series, and more. Overall, his most viewed video is the slightly dark video Malk.

Jeffery Dallas is the eccentric yet monotone character Julian portrays and has popularity with his viewers. Claiming he is not retarded, but instead ate a jellyfish, Jeffery has starred in his own popular series of videos and was even given his own channel and advice series, called Dear Jeffery Dallas. Though, recently, he has returned to Julian's official channel.

Aside from his jellyfish incident, Jeffery's background has been dealt with in a few of Julian's videos. For one, Jeffery is Julian's cousin. He seems to have an interest in photography, as suggested in Red Eye Flashes Twice and most likely has a dislike towards jellyfish following his incident.

Collaborations with Rhett and LinkEdit 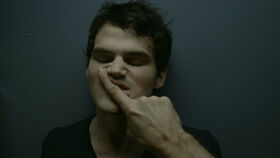 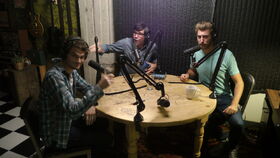 Among other YouTube celebs, Julian has collaborated with Rhett and Link for multiple videos on his channel, theirs, and others. One major example would be Jeffery Dallas' debut video, Waffles, where Rhett and Link played roommates of the waffle-loving Jeffery Dallas who refused to share his stack of twelve waffles in a commercial for the fake Willy Waffle Company.

Another example is Rhett and Link's cameo in a season two episode of Julian's series Kidnapped in which Rhett and Link attempted to film a video with him. Gabriel ends this quickly by telling them he is busy.

On Rhett and Link's channel, Julian has guest-starred in a few videos. Recently, the abrasive Mr. Timn makes a quick cameo and mention in their music video for the song "Rub Some Bacon on It". In 2010, Julian appeared as himself in another music video "Perfect Bathroom Trip" alongside vlogger iJustine.

Elsewhere, Julian and his production company Papertown produced Rhett and Link's starring episode, "Goth Boy" in Geek and Sundry's Written By A Kid.

Rhett and Link also had Julian Smith on their audio-only podcast, Ear Biscuits.

In 2014, Smith also featured Rhett's son in the music video for his song, Car Phone![1]

Retrieved from "https://rhettandlink.fandom.com/wiki/Julian_Smith?oldid=11180"
Community content is available under CC-BY-SA unless otherwise noted.